This year’s thrilling Russian Grand Prix was held this afternoon at the Sochi Autodrom, a street circuit which evolved out of the internal roads around the site developed for the 2014 Winter Olympics, and Mercedes’ Sir Lewis Hamilton claimed his 100th F1 victory as longtime leader for McLaren Lando Norris lost a potential maiden win due to late heavy rain. All eyes were also on Hamilton’s title rival, Red Bull’s Max Verstappen, who rose from last on the grid to finish second.


Lewis Hamilton reached a century of F1 victories in a rain affected Russian Grand Prix
On the Tuesday before the Russian event it had been announced that Martin Whitmarsh will return to Formula 1 on 1st October as Group CEO of Aston Martin Performance Technologies. He had previously worked for McLaren from 1989 to 2014 and had been the outfit’s CEO and team principal from 2008 until his departure. His key area of responsibility will be in relation to Aston Martin’s road car and F1 technology as the Silverstone based team pursues its objective of becoming a Formula 1 world championship winning organisation within the next five years.

Looking ahead to next season, the new calendar is expected to feature 23 races and is set to be revealed in mid October. Miami announced last week that it will be holding its inaugural Grand Prix in early May and later that month the usual four day Thursday to Sunday Monaco Grand Prix format, which we have long become accustomed to, will now last just three days to assist logistically with the transfer from the Spanish race in Barcelona on the previous weekend.

Turning back to Sochi, the teams knew that the best DRS assisted overtaking opportunities would be on the main straight and approaching Turn 13. Their strategists were also well aware that, with four opening lap Safety Car interventions having been required during the last five Grands Prix there, there was a distinct chance of the same happening again. 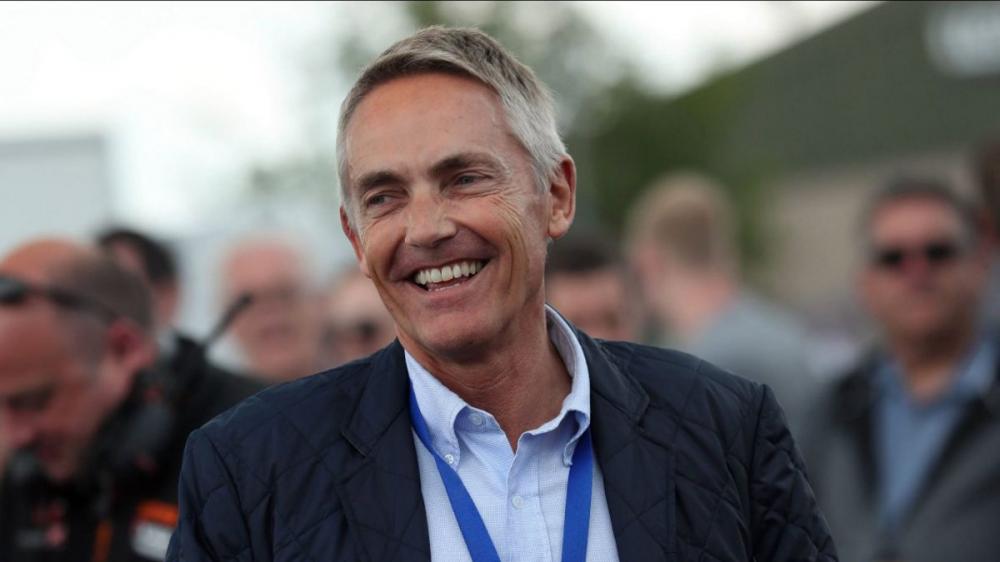 Martin Whitmarsh is returning to F1 with Aston Martin next month
On the driver front, Aston Martin had announced pre Sochi that Lance Stroll and Sebastian Vettel would be continuing to race for them next year, as did Haas re Mick Schumacher and Nikita Mazepin. This just leaves Alfa Romeo to reveal who will be their second driver next season alongside Valtteri Bottas, with the 22 year old Chinese Formula 2 racer Guanyu Zhou a strong candidate to replace Antonio Giovinazzi.


When those famous red lights went out it was Sainz who emerged ahead after the 890 metre sprint to the first braking zone at Turn 2, followed by Norris and Russell and with Hamilton dropping three places to seventh.
Despite not agreeing with it, Verstappen arrived in Russia seeming quite relaxed about the three place grid penalty he’d received after the stewards had considered him to be “predominantly to blame” for his controversial coming-together with Hamilton during the preceding Grand Prix at Monza. With heavy rain forecast for Saturday’s final practice and the crucial qualifying hour, his Red Bull team opted to give him a new, fourth power unit of the year even though it meant he would be relegated to the back of the grid for the race start. Over in the Ferrari camp Charles Leclerc was also set to start at the back after a penalty for the introduction of an updated version of his power unit’s hybrid system. His team-mate Carlos Sainz is set to obtain the same modest upgrade later due to a staggered approach.

Friday morning’s opening free practice period had taken place in dry conditions and Mercedes led the way, with Bottas outpacing Hamilton and Verstappen and Leclerc completing the top quartet. Come the afternoon second session Bottas again topped the timesheets ahead of Hamilton, who made a mistake at a pit stop and knocked over his front jack man. Verstappen ended up sixth fastest as he started using his new Honda power unit and ontrack activity had to be temporarily halted for ten minutes after Giovinazzi had spun off backwards at high speed in his Alfa and put it into the Turn 8 barriers.

Heavy overnight rain which continued yesterday morning meant that the final practice period had to be cancelled, with the F1 race director Michael Masi hoping that an afternoon improvement in the conditions might allow qualifying to still take place at 3pm local time. Fortunately this was the case, although the track was still wet enough for intermediate tyres to be the order of the day for the opening two parts of the elimination process. With a dry line emerging for the top ten shootout all ten drivers initially still remained on the same rubber, but Williams’ George Russell was the first to change for slicks and soon all the others followed suit. 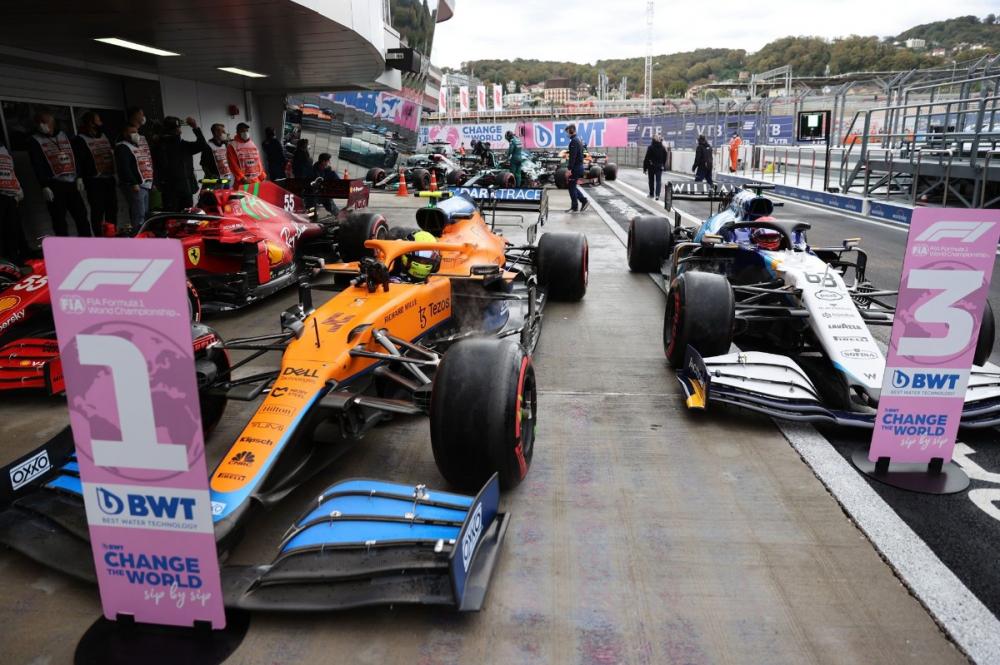 The top three in qualifying (Lando Norris, Carlos Sainz and George Russell) gave us a glimpse of F1‘s exciting future
However, there was drama when Hamilton made another mistake and tapped the pit lane entry wall, requiring his front wing to be changed and his suspension checked for any damage. The Mercedes mechanics pushed him out of the way so that Bottas wouldn’t be unduly held up at his own stop and then the reigning champion made another error as he spun at Turn 16 when attempting his sole fast lap on soft specification tyres. Amidst the improving track conditions it was 21 year old Norris from Glastonbury who claimed a fully deserved first ever F1 pole position ahead of Sainz, the Spaniard claiming the first front row start of his own Formula 1 career. Young Russell from King’s Lynn also put in another truly impressive performance to claim third on the grid for today’s Grand Prix ahead of his multiple champion team-mate at Mercedes next year Hamilton. The top trio of Norris, Sainz and Russell was a highly popular result and gave us a welcome glimpse into the exciting future which lies ahead for them and F1 in general,

There was no Russian national anthem just before the start of this afternoon’s Grand Prix, but instead we were treated to the delight of a ballerina dancing on a revolving grand piano to the accompaniment of music by Tchaikovsky. Very much a first for me in 24 years of reporting! When those famous red lights went out it was Sainz who emerged ahead after the 890 metre sprint to the first braking zone at Turn 2, followed by Norris and Russell and with Hamilton dropping three places to seventh. As the race pattern settled Hamilton improved to sixth, whilst Verstappen was already up to 12th by lap 10. 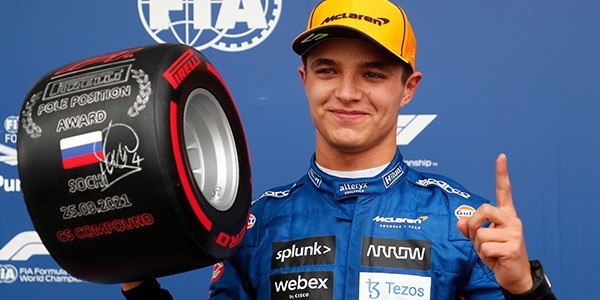 Hearts went out to polesitter Norris, who led for most of the race before the late rain arrived
On the 13th tour of 53 Norris belied his youth by calmly sweeping past Sainz into the lead on the back straight. With Russell and Sainz then pitting, Norris led from his team-mate Daniel Ricciardo, Hamilton and Red Bull’s Sergio Pérez, with Verstappen sixth. By lap 29 all the main contenders had made their opening and potentially only pit stops of the race, with Norris fourth but the real leader behind the still to stop Pérez, Fernando Alonso and Leclerc.

Come lap 37 Norris led Hamilton by 2.3 seconds ahead of Sainz and Ricciardo, with the reigning champion looking to catch and pass Norris for his 100th victory whereas Norris was starting to think his first win might be possible as the pair were very evenly matched for pace. However, the Grand Prix was about to have a sting in its tail as increasing rain arrived with spectators rushing to don their anoraks and put up their umbrellas. The drivers and teams were faced with difficult choices as the track was dry in parts, but very slippery elsewhere as Norris and Hamilton still led everyone round in the treacherous conditions. By the 48th tour the conditions were becoming almost impossible for slick tyres and teams started bringing their drivers in to switch to intermediate rubber. Mercedes brought Hamilton in for the change on the following lap, but the still leading Norris gambled on staying out with so few laps remaining. 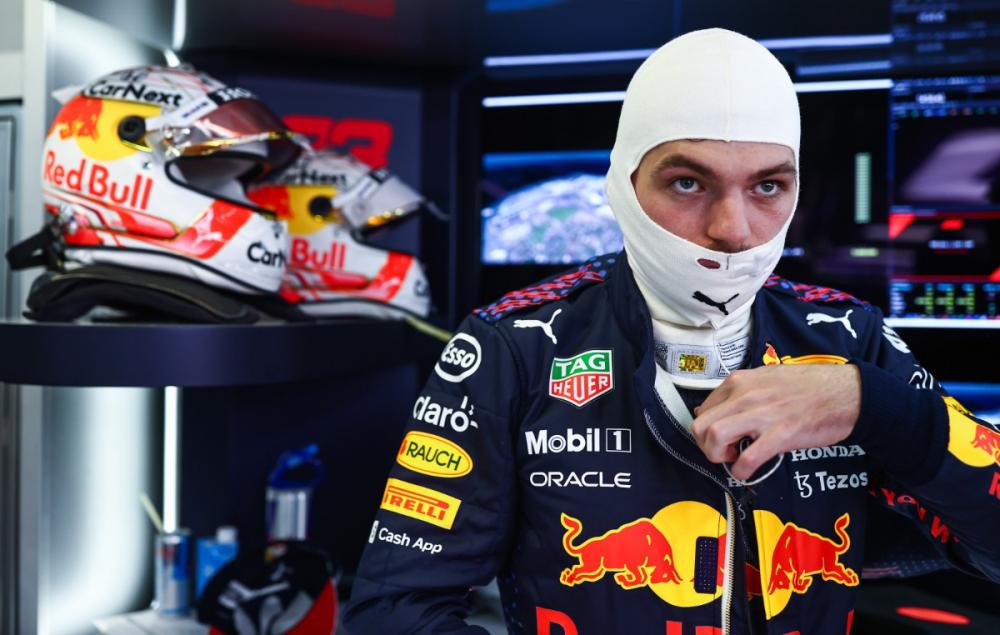 Max Verstappen kept his title hopes very much alive after climbing from last to second
It proved to be the wrong decision as the heavy rain made driving on slicks impossible and Norris’ increased lead was quickly swallowed up by the intermediate shod Hamilton. By the chequered flag Verstappen had risen to second place behind his arch rival, with Sainz completing the podium trio and Ricciardo, Bottas and Alonso rounding out the top six. On a day when victory was within his sights Norris ended up finishing in seventh place, at least earning the extra point for the fastest lap of the race, with Russell notching up another points finish for Williams.

Formula 1 now has one more European race this season, at Turkey’s Istanbul Park circuit in two weeks’ time, before a series of long-haul destinations complete the calendar and it will be fascinating to see how the gripping title battle between Hamilton and Verstappen continues to progress with them still being a mere two points apart.