Hamilton Reduces The Gap To Verstappen To 8 Points

Qatar has held its first ever Formula 1 Grand Prix at Doha’s Losail International circuit, with yesterday’s qualifying and today’s race both taking place after sunset and with Mercedes’ victorious Sir Lewis Hamilton reducing his deficit to Red Bull’s Max Verstappen to just eight points with two races to go. 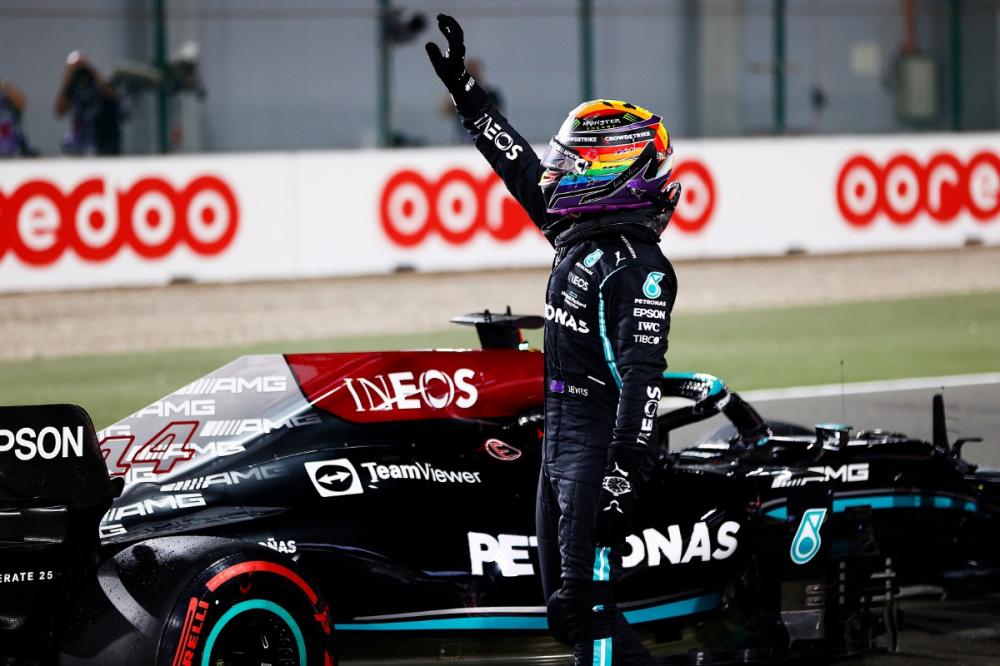 Lewis Hamilton claimed a comfortable victory over Max Verstappen in the inaugural Qatar Grand Prix
The Losail track has only one main straight, albeit a rather long one at 1068 metres including the single DRS zone, and this meant that overtaking would be challenging, the best opportunity being under heavy braking into the opening corner. The circuit does though feature plenty of smooth run-off areas to forgive errant drivers, but beyond them lie gravel traps which could leave cars beached.

Hamilton and Verstappen have long proved themselves to be the cream of this year’s drivers and soon the duo were leaving the other 18 cars in their wake.
With Verstappen having arrived in Qatar with a 14 point lead over his arch rival Hamilton, Mercedes’ Toto Wolff and his lead driver continued to feel aggrieved that Verstappen hadn’t received any penalty in Brazil last weekend for his lap 48 clash with Hamilton. The team principal described the situation as “laughable” and on Tuesday the Austrian had requested an official Right of Review about the incident. Onboard footage from the Red Bull driver’s car, made public two days after the race and which Mercedes felt proved their case, appeared inconclusive in terms of apportioning any blame for what seemed to have simply been a case of hard, but fair racing. Because the stewards who had been on duty in São Paulo and not those present in Qatar had to be involved, there was a need to progress the matter by video conference.

Mercedes and Red Bull had attended such an online meeting last Thursday at 17.00 local time and it was subsequently announced later that evening that the stewards’ decision would be revealed the following day about whether to allow Mercedes a Right of Review. This duly happened on Friday when the stewards explained that the onboard evidence from Verstappen’s car was “not significant” and that their original decision still stood, with no penalty due for the Red Bull driver. This merely led to the relationship between Wolff and his Red Bull counterpart Christian Horner becoming frostier than ever as Mercedes face real title winning opposition from another team for the first time in many years. 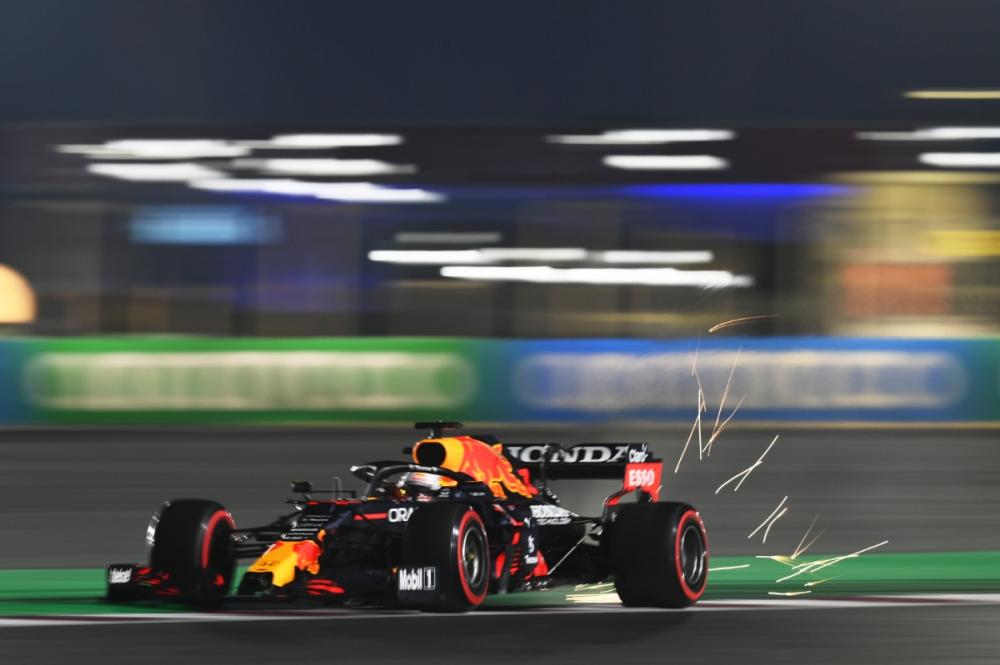 Verstappen quickly climbed from seventh to second, but couldn’t match Hamilton’s pace
Hamilton had been seen to enjoy an unexpectedly large straightline speed advantage over every other team in Brazil, which helped his impressive results in both the Sprint race and the Grand Prix. Part of the reason would have been the new engine he had installed in São Paulo, but Red Bull has had growing concerns too about whether Mercedes has been running a clever rear wing, resulting in Horner confirming in Doha that his team would not hesitate to protest the legality of it at some stage during the remainder of the season if it felt justified.

Away from the intense rivalry and arguments between Mercedes and Red Bull, in the build-up to the weekend in Qatar Alfa Romeo had announced that Guanyu Zhou will be racing for the team next year alongside the incoming Valtteri Bottas and in place of Antonio Giovinazzi, who is set to race in the all-electric Formula E championship next year. Zhou, a well backed 22 year old Formula 2 racer, will be the first ever Chinese F1 driver, even if his country’s home Grand Prix will again not feature on next year’s calendar due to pandemic related issues. There had also been news that the 20 year old Australian rising star Oscar Piastri has been promoted from the Alpine Academy to become its F1 reserve driver next year, having won the FIA F3 title in 2020 and gone on to currently lead this season’s Formula 2 standings.

Turning back to the ontrack action in Doha, the drivers got their first ever taste of the circuit early on Friday afternoon local time in the opening free practice session after preparing in advance in their team simulators. Initial practice isn’t always an accurate indicator as to how the weekend is likely to progress, but it was Verstappen who was comfortably fastest ahead of best of the rest Pierre Gasly for AlphaTauri and Valtteri Bottas’ Mercedes, with Hamilton fourth and 0.786s slower than his title rival. Darkness had just fallen by the time Friday’s second practice period got underway and this time Bottas topped the timesheets ahead of Gasly, Verstappen and Hamilton, whilst in yesterday’s final practice Bottas, Hamilton and Verstappen led the way. Come the all-important qualifying hour the two title rivals claimed the front row on the grid for today’s Grand Prix, with Bottas and Gasly set to start just behind them despite the latter losing his front wing after hitting a kerb and suffering a front right puncture. 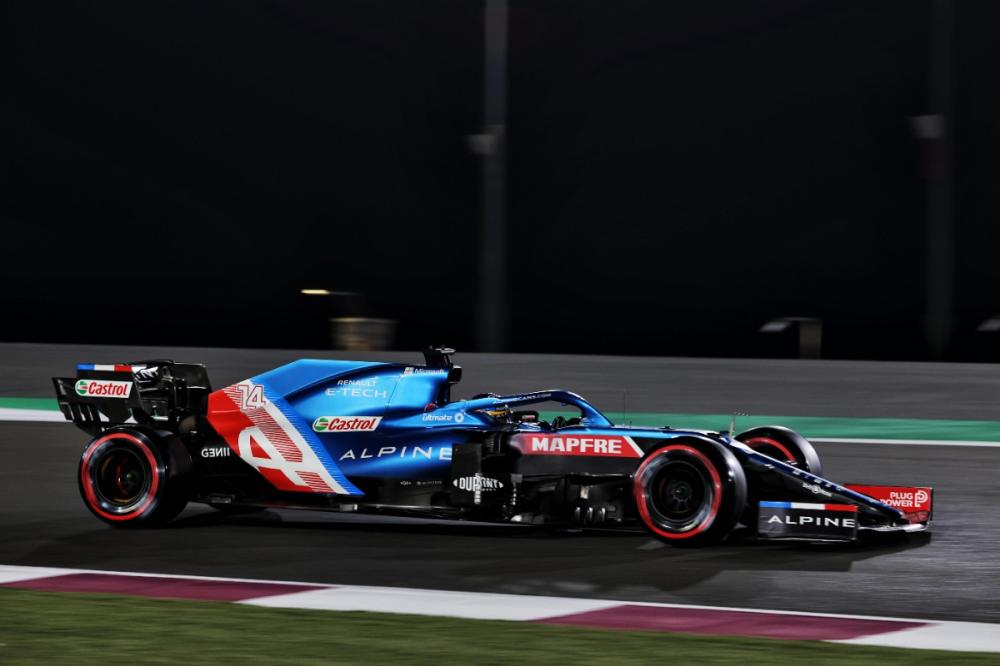 A delighted Fernando Alonso achieved his first podium finish since 2014
Further potential controversy, as if we haven’t had enough recently, then followed yesterday’s qualifying when Verstappen, Ferrari’s Carlos Sainz and Bottas were separately summoned to see the stewards before today’s race for alleged breaches of yellow flag regulations in the final part of the session. The result was a five-place grid penalty for Verstappen for failing to respond to double waved yellow flags, although the stewards expressed their sympathy as there were mitigating circumstances as the regular yellow trackside warning panels were not showing at the time and the driver had received no warning on his dashboard or through his earpiece. A three-place penalty was also given to Bottas for ignoring a single yellow, with Sainz avoiding any sanction. As a result Verstappen was demoted to seventh for the start of today’s race, well adrift of polesitter Hamilton.

Hamilton and Verstappen have long proved themselves to be the cream of this year’s drivers and soon the duo were leaving the other 18 cars in their wake. On lap 18 Red Bull brought their team leader in for a switch from medium to hard specification tyres and Mercedes immediately responded, mirroring the same change for their own number one driver. Alonso had started on soft tyres, hoping to challenge for the lead, but pitted on lap 24 for hard rubber. 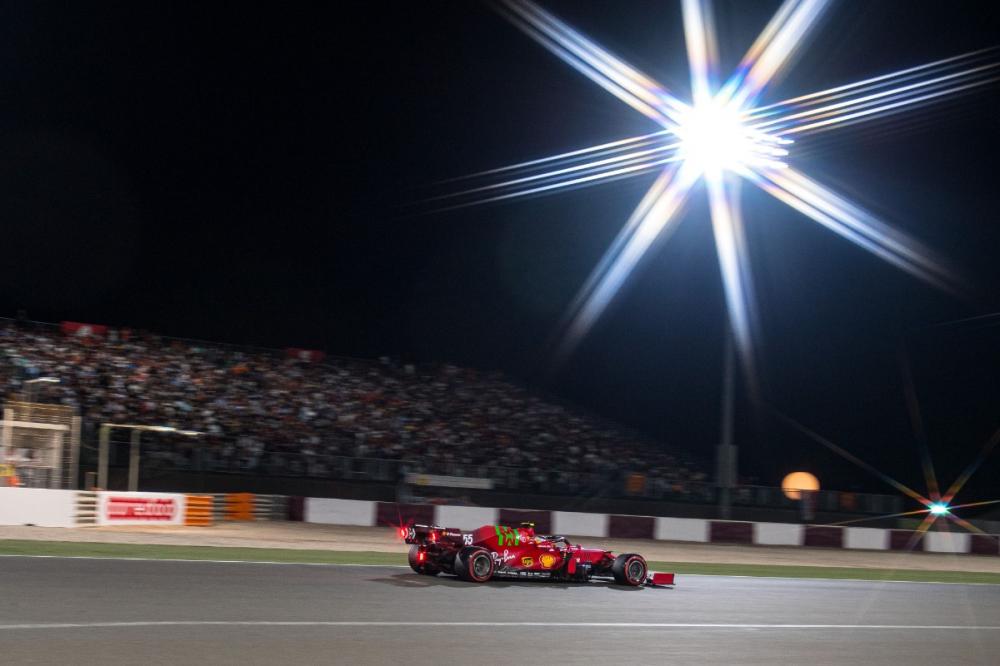 Seventh placed Carlos Sainz led his Ferrari team-mate Charles Leclerc to the chequered flag
Soon the yet to stop Bottas had picked his way through the field to third place, but on the 33rd tour the Finn suffered a front left puncture and limped back to the pits for hard tyres and a new front wing, dropping him down to 14th. Nine tours later Red Bull pitted Verstappen for a second time, changing his hard tyres for mediums, and again Mercedes opted for the same change for Hamilton.

As the closing stages of the race neared we witnessed the retirement of Bottas and a flurry of front left tyre failures for Norris and also the Williams cars driven by George Russell and Nicholas Latifi. The latter’s retirement trackside triggered the start of a Virtual Safety Car period to assist the recovery of his stricken machine and this only ended with a single lap remaining.

Verstappen already had the fastest lap of the race, but his team brought him in for a set of soft tyres for a further attempt, with the extra point gained potentially crucial to the outcome of the battle with Hamilton come the end of the season. To the rear of the front duo Red Bull’s two-stopping Sergio Pérez was hunting down the one-stopping and third placed Alonso, but the Mexican ultimately had to settle for fourth place as the 40 year old Spaniard, helped by the VSC period, held on to the final podium position, his first top three finish since 2014. 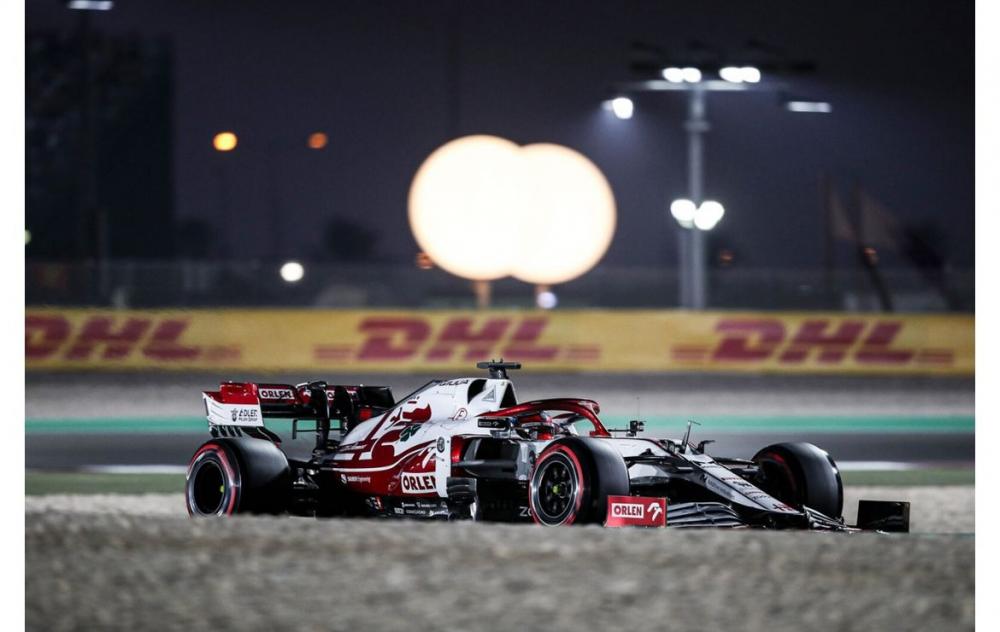 Alfa Romeo’s Kimi Räikkönen now has just two races left before the end of his long F1 career
The next race in two weeks’ time will be a further inaugural Formula 1 event, this time in Saudi Arabia, and the F1 authorities have admitted that work to get the circuit in Jeddah ready in time will “go down to the wire”, but they are confident that at least everything required to hold a safe race will be in place. Saudi Arabia and Abu Dhabi are very fortunate in being set to host the two races which will determine the outcome of this absolutely thrilling season re both Championships.
Bring it on.

Also by Graham Read...
Oscar ﻿Piastri At Centre Of F1 Contracts RowAlonso To Race For Aston Martin From 2023 OnwardsVerstappen Flies ﻿From 10th To Victory In HungaryFour-Time F1 Champion Vettel To RetireVerstappen On Top In France Ahead Of Mercedes Duo