Today Brazil hosted the middle race in the current and somewhat logistically challenging tripleheader of Formula 1 races on consecutive weekends, following on from Mexico just seven days ago and preceding the immediate relocation to Qatar in the Middle East for next weekend. Red Bull’s Max Verstappen had arrived in São Paulo with a 19 point lead over his arch rival for this year’s Drivers’ title, Mercedes’ Sir Lewis Hamilton, and after a dramatic series of events at the Autódromo José Carlos Pace, better known as Interlagos, the pair left with the gap reduced to 14 points. 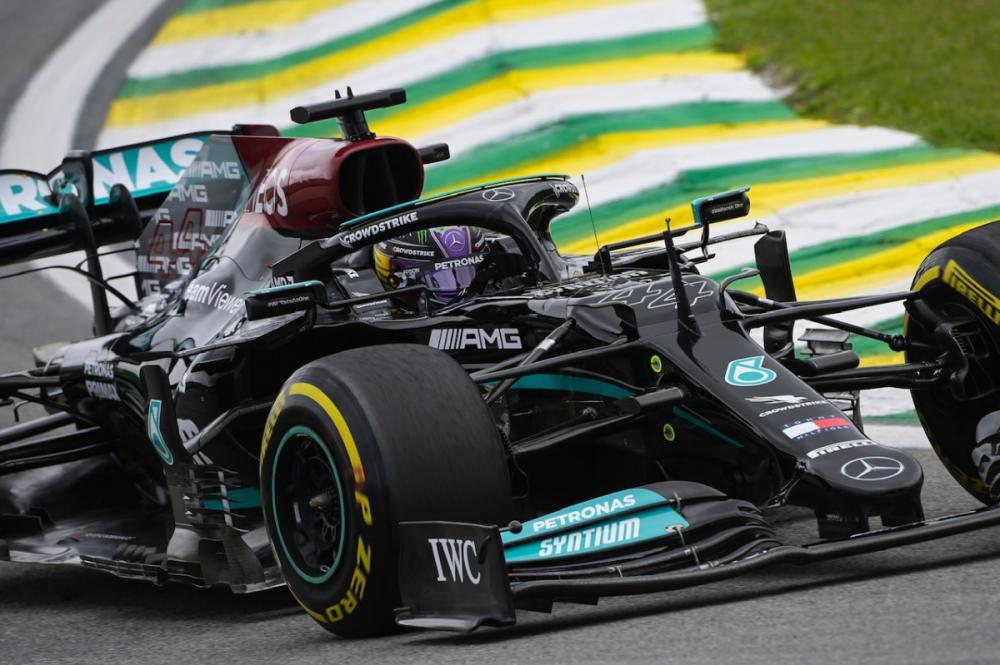 Lewis Hamilton emerged from a troubled weekend with a well earned victory
On the news front in the build-up to the race weekend in Brazil, we saw the introduction of some new branding and graphics focussing on F1’s high tech hybrid power units first introduced back in 2014 and Aston Martin driver Sebastian Vettel, who is taking an increasing interest in environmental issues, visited the Brazilian organic produce and dairy farm of former F1 driver Pedro Diniz, a business with a growing reputation.

At least Vettel retained his legendary sense of humour on team radio whilst parking his car after the Sprint race, saying he might touch Hamilton’s rear wing, to which his team said he really shouldn’t as it might prove very expensive! Vettel quipped in reply “I’m only joking, but perhaps I should touch the front wing instead as that might only cost 25 grand!
”
Delays in some team freight being transported to the circuit from Mexico City after the previous weekend’s Grand Prix meant that the deadline by which all pre-event scrutineering formalities had to be completed ahead of first practice was extended by 15 hours. This avoided any potential need to amend any of the scheduled timing of ontrack sessions set for Interlagos, which were to include a third Sprint race of the season after the previous trials at Silverstone and Monza. 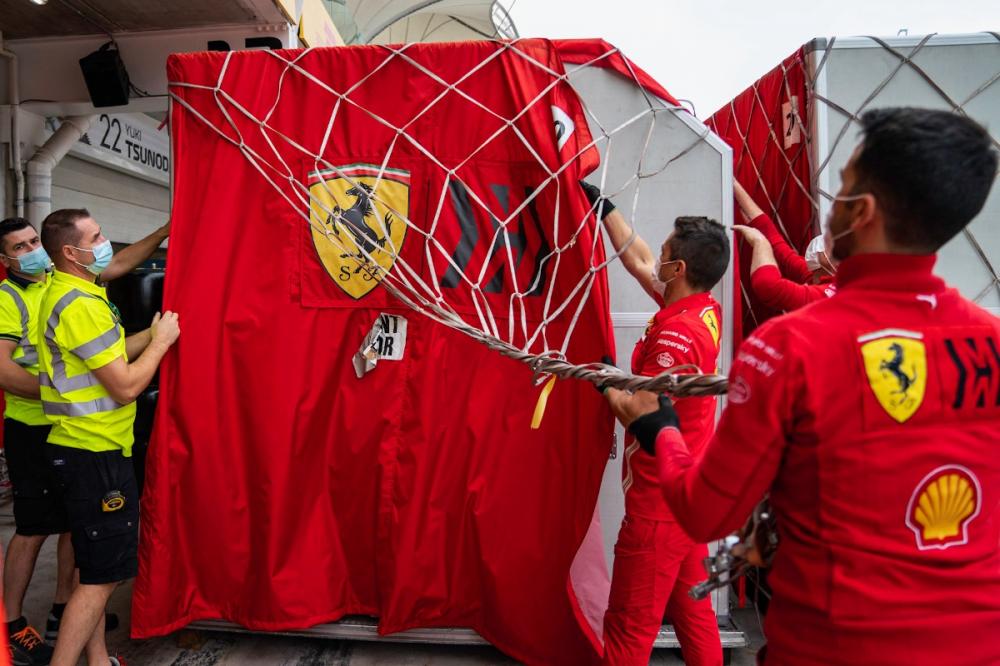 Ferrari was one of the teams whose freight arrived late from Mexico
It had been announced before the start of Friday’s opening free practice session that Hamilton would face a five-place grid penalty for today’s Grand Prix after Mercedes had chosen to fit a new, fifth internal combustion engine (ICE) to his power unit beyond his permitted allocation of three for the season. With the new engine installed, Hamilton proceeded to set the fastest time of the practice period ahead of Verstappen and his Red Bull team-mate Sergio Pérez and all eyes were on Friday’s subsequent qualifying hour to see who would be where on the grid for the following day’s Sprint race. It proved to be Hamilton who again dominated, with Verstappen the best of the rest followed by Valtteri Bottas’ Mercedes and Pérez.

1 Lewis Hamilton (Mercedes) 1hr32m22.851s
2 Max Verstappen (Red Bull) +10.496s
3 Valtteri Bottas (Mercedes) +13.576s
4 Sergio Pérez (Red Bull) +39.940s
5 Charles Leclerc (Ferrari) +49.517s
6 Carlos Sainz (Ferrari) +51.820s
7 Pierre Gasly (AlphaTauri) Lapped
8 Esteban Ocon (Alpine) Lapped
9 Fernando Alonso (Alpine) Lapped
10 Lando Norris (McLaren) Lapped
11 Sebastian Vettel (Aston Martin) Lapped
12 Kimi Räikkönen (Alfa Romeo) Lapped
13 George Russell (Williams) Lapped
14 Antonio Giovinazzi (Alfa Romeo) Lapped
15 Yuki Tsunoda (AlphaTauri) Lapped
16 Nicholas Latifi (Williams) Lapped
17 Nikita Mazepin (Haas) Lapped
18 Mick Schumacher (Haas) Lapped
19 Daniel Ricciardo (McLaren) Retired
20 Lance Stroll (Aston Martin) Retired
Controversy erupted though on Friday evening when Hamilton’s car failed post-qualifying scrutineering checks about the gap between the two elements of his rear wing with DRS activated. This exceeded the maximum 85mm allowed and could have given the car an illegal performance advantage, meaning that, if proven, the stewards would need to exclude Hamilton from the results and force him to start the Sprint race from the back of the grid. His car’s DRS system was removed and impounded overnight pending further evidence being presented yesterday so that a final judgment could be made. Verstappen’s car and all the others checked were found to be legal, but the Red Bull team leader had been seen to gently touch the rear wings of both his own car and Hamilton’s immediately after qualifying, which was a 0**breach of the parc fermé “no contact” regulations, if of far lesser importance. The stewards’ verdicts about both investigations were eagerly awaited throughout yesterday as they could have a significant impact on the battle for the Drivers’ title, but the crucial rulings had still not been issued by the time the second and final practice session began at noon local time.

As a result, Hamilton was forced to use a different rear wing whilst his original one remained impounded and he posted only the fifth fastest time, whilst Alpine’s Fernando Alonso went quickest ahead of Verstappen, Bottas and the former’s team-mate Esteban Ocon. As the clock headed towards the start of the Sprint race at half past four Brazilian time it was clear that the stewards’ verdicts really were needed as they would potentially impact the starting grid. Ultimately Verstappen was given a reprimand and an eye-watering 50,000 Euro fine for briefly touching but not interfering with Hamilton’s car under parc fermé conditions, whilst his rival’s far more serious breach of the rear wing regulations meant he was excluded from the qualifying results and had to start last for the Sprint encounter. 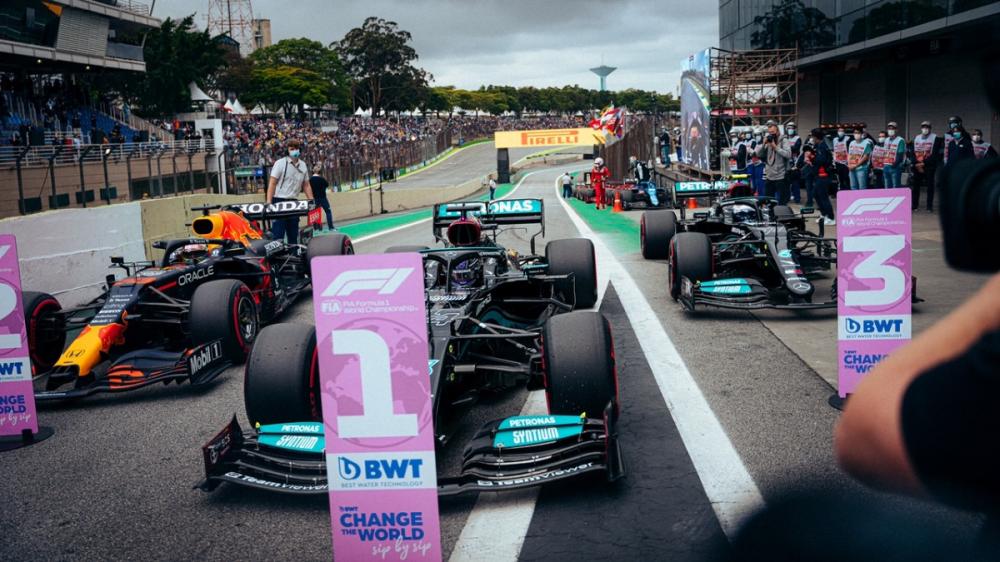 Hamilton finished first in qualifying, but an illegal rear wing saw him removed from the results
So, after all the deliberations, arguments and the stewards’ verdicts it was Verstappen and Bottas who lined up on the front row for yesterday’s 24 lap Sprint event and the scene was set for a dramatic precursor to today’s main encounter. Bottas made great use of his soft specification tyres to immediately power past the medium shod Verstappen into the lead at Turn 1 and three corners later Ferrari’s Carlos Sainz, also on softs, did likewise. However, at the start of lap four the Dutch charger swept back into second position up the inside of the Spaniard, but was then unable to threaten the leading Bottas despite closing. A second place finish for Verstappen earned him two extra points, extending his lead over Hamilton to 21, but the latter made strong progress through the field to reach the chequered flag in fifth place. The Red Bull team principal Christian Horner remained sceptical about the sheer pace advantage of Hamilton’s car on the main straight as he eased past 15 cars during the short race, describing it as “mind-boggling” and in excess of what you would normally expect. At least Vettel retained his legendary sense of humour on team radio whilst parking his car after the Sprint race, saying he might touch Hamilton’s rear wing, to which his team said he really shouldn’t as it might prove very expensive! Vettel quipped in reply “I’m only joking, but perhaps I should touch the front wing instead as that might only cost 25 grand!”

With the result of the Sprint race used to set the grid for today’s 71 lap Grand Prix and with Hamilton also having his engine change related five-place grid penalty applied, it was Bottas and Verstappen who lined up at the front of the grid for the 2pm local time start ahead of Sainz and Pérez, with the reigning champion back in tenth position. The weather conditions were much warmer today and, when those famous five red lights went out and the 20 cars sprinted the short uphill distance to the opening left hand corner, it was Verstappen who swept into an immediate lead. Pérez then passing Bottas for second made it a dream start for Red Bull, whilst Hamilton quickly climbed from 10th to sixth. 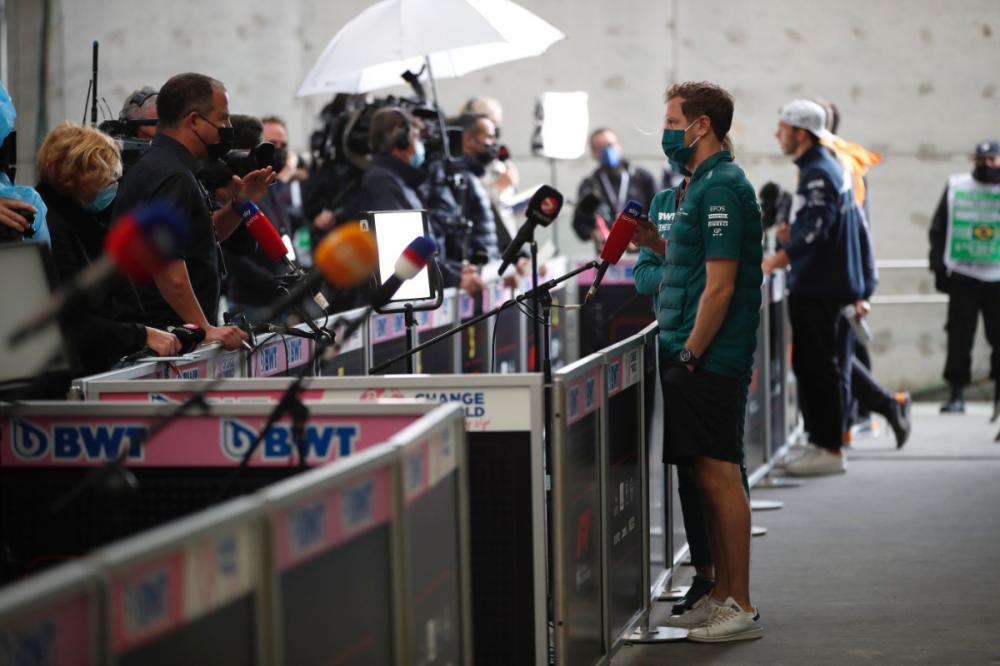 Seb Vettel enjoys a socially distanced media chat with Sky F1’s Ted Kravitz
Soon Hamilton was up to third behind the Red Bull duo, but the action was interrupted by a Safety Car intervention to enable the removal of debris from the track after AlphaTauri’s Yuki Tsunoda had made an overly ambitious passing attempt on Aston Martin’s Lance Stroll. Racing resumed on lap 10, but was a quickly followed by a Virtual Safety Car period after Mick Schumacher had damaged the front wing of his Haas. When battle recommenced, Pérez and Hamilton fought over second place before the Mercedes driver made it his own at Turn 1 on lap 19 and then pitted for hard tyres eight tours later. Red Bull immediately responded by bringing the leading Verstappen in for the same switch. A second Virtual Safety Car soon followed after Stroll’s car had left debris on the start/finish straight and Mercedes took advantage of this to pit Bottas, bringing the Finn back onto the circuit in third place behind Verstappen and Hamilton.

A series of second pitstops for the leading quartet followed as all four had further sets of hard rubber bolted on, after which Verstappen led Hamilton by 2.6 seconds. The fight between the two Championship rivals quickly hotted up and on lap 48 the pair both flew off the track at Turn 4 before rejoining in the same order and with the officials adjudicating that no investigation was needed. 11 tours later Hamilton eventually found a way past his rival with DRS assistance on the back straight and it was game over out front as the Mercedes number one headed on to the chequered flag ahead of Verstappen. To their rear Bottas claimed the final podium position and fourth placed Pérez earned the extra point for the fastest lap of the race on the final circulation. The Ferrari duo completed the top six finishers, helping their ongoing battle with McLaren to be the best of the rest behind Mercedes and Red Bull. 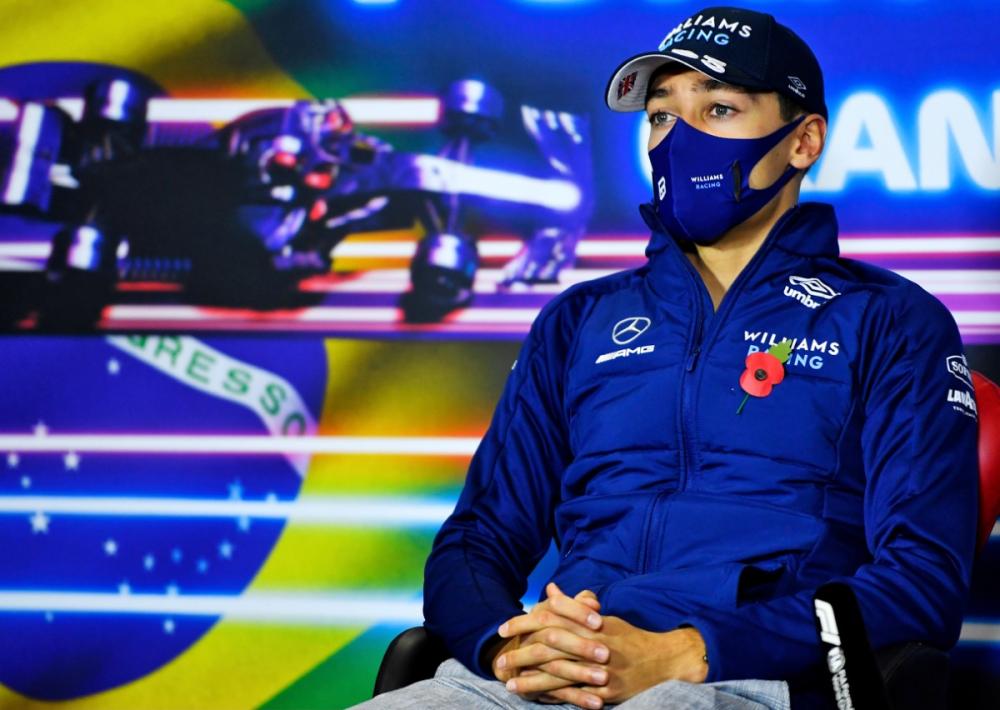 George Russell has three more races for Williams before joining Mercedes alongside Hamilton
So, as the massed fans started to drift away from Brazil’s iconic Interlagos circuit the teams were busy packing everything away ready to be transported without delay to the Middle East, knowing that the cars would be back on track in Qatar for the country’s inaugural Formula 1 event just five days later. Most important of all was the fact that, with three Grands Prix remaining, it is simply brilliant that this season’s Drivers’ and Constructors’ titles are both still very much up for grabs.