Paul Karabardak held his nerve against world number one Alvaro Valera as ParalympicsGB edged a thrilling semi-final in the class 6-7 team table tennis.

Karabardak imitated partner Will Bayley as the Brits bounced back from losing a heart-breaking doubles match to reach the final by seeing off Spain.

Having lost to Valera and Jordi Morales, 17-15 in the deciding game, in the doubles, Bayley and Karabardak had no margin for error, but a convincing win over world champion Morales from Bayley levelled the tie.

And Karabardak then followed that up by getting the better of Valera 11-9 in the decider, his first win at his 13th attempt against the Spaniard, converting his first match point much to guarantee themselves at least a silver medal.

Bayley said: “After the doubles I was feeling that we could still win the match because I’ve got Paul Karabardak in my team. I think it showed with my singles the way I played Jordi that I knew we were well in it.

“I never gave up that hope that we could still win the match. Paul playing the way he is and the way he played in the singles I had no doubts that he could beat Valera but the way he beat him – he’s a legend.”

Karabardak added: “It’s like a miracle and I can’t believe it. I knew that I had a chance and I just stuck to my game plan and I dug deep. It’s hard to have confidence when you’ve never beaten someone before but Will got behind me and Andy (coach Andrew Rushton) got behind me and all the team got behind me and that really lifted me. I managed to take the second set and I thought I’m in this and I’ve got a good chance here. “

“In a Paralympic semi-final against the world number one – an absolute legend of the game – you don’t normally do that so I think it probably is one of my best wins.” 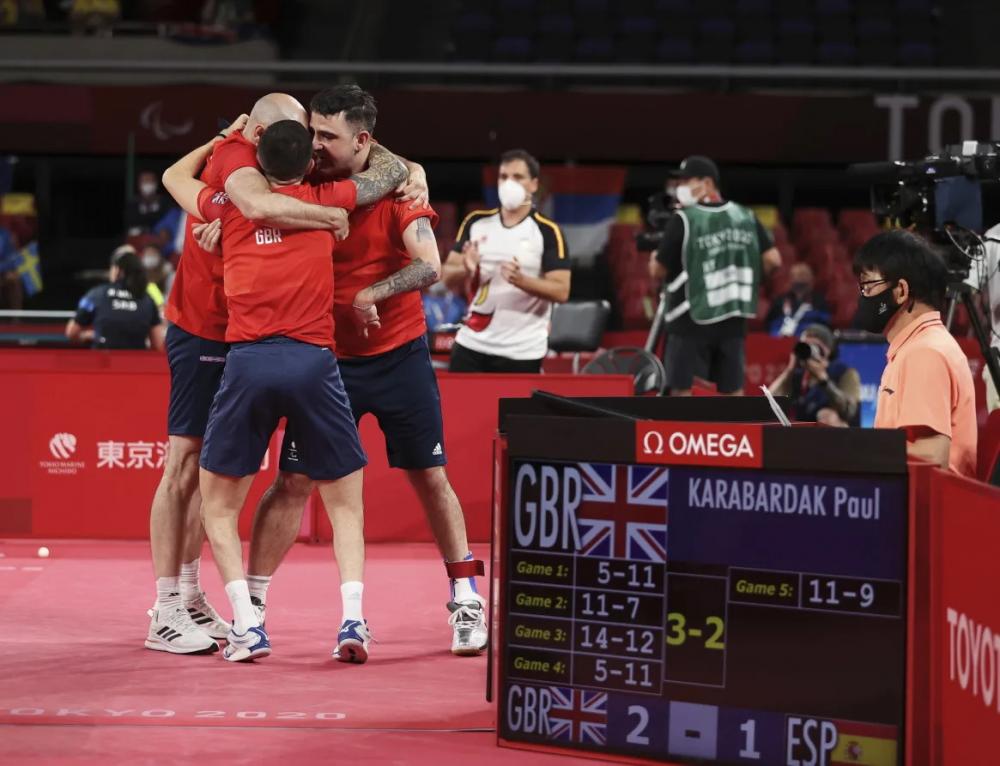 Paul Karabardak came through to earn a place in the final
In the men’s class 8 team, the team of Ross Wilson and Aaron McKibbin were beaten 2-0 by China, losing 3-1 in the doubles before Wilson was edged out 3-2 in the first singles match.

As a result, they come away with a bronze, alongside Billy Shilton, who helped the team reach the semi-final stage with his performances against Hungary in the quarter-finals.

“It was a great match,” said Wilson. “We have had some crazy matches over the years and it was great to be a part of this one today. I wish the outcome could have been the opposite way and I could have kept us in the team event a little bit longer, but it is just one of those things.”

McKibbin added: “I think to be fair we played a really good match in the doubles and I’m very proud of our performance.

“China is obviously a very strong team and if we could have nicked that second set it could have changed the match but there is not much to regret to be honest. We went out with a game plan and we stuck to it and executed it. It is just unfortunate how sport goes sometimes.”

And it was a similar story for the pair of Sue Bailey and Megan Shackleton, beaten 2-0 in their semi-final against China in the women’s class 4-5.

“They’re a really strong team so we knew it was tough coming in,” said Bailey, who won her first Paralympic medal at her sixth Games.

“But we knew we had a bronze medal so we just wanted to enjoy it and play the best we can. We played so well in the doubles so I’m just so proud of us as a team.

“It’s been such a long time coming so I’m thrilled to bits we’ve finally got that medal and at Megan’s first Paralympic Games.

“What a fantastic partner I’ve got and I can’t wait for the future for us both.”