It's a long time since I donned my white coat as a former Senior Medical Laboratory Scientific Officer, working for the National Blood Transfusion Service. Preparing to interview Dr Gill Hart the memories come flooding back.

We are, as I am soon to discover, both Fellows of the Institute of Biomedical Scientists.

That’s where the similarity ends; I gave up science to pursue a journalism and business career and Dr Hart went on to use her skill to develop ‘do it yourself’ antibody test kits, initially to help people suffering from food intolerances, but now expanded into wider health testing.

YorkTest started in 1982, set up by a couple of scientists who began to think about diet and food and how to help people suffering from certain intolerances by identifying cause and then get help with lifestyle changes.

As Dr Hart says: “For us it is about making the invisible visible. The company really came to the fore in 1998 when we developed our current food intolerance specific IgG test, which was an exciting time because it led to greater things.

80% of people who first contact YorkTest come after suffering for over a year. And certainly, more than 30% of people have been suffering for over 5 years.
“We discovered that food intolerance testing was really important for individuals suffering from issues such as poor gut health, skin problems, low energy, low mood, headaches and migraines.”

Sadly, people approach YorkTest after they have been suffering for many years and Dr Hart would encourage a quicker response. We discuss the need to think differently about some health issues.

“How many of us have been to see the doctor many times with a problem and not really got the help needed in terms of knowing that a food could be a problem? We can help pinpoint an intolerance,” she says.

I fit into that category. Luckily, there is no serious underlying problem and as a result of doing this interview I have decided to take a test.

“It is important,” Dr Hart stresses, “if someone has got symptoms, they go to their doctor to rule out anything serious but if it is ongoing, and not serious, it is important to find out if food could be a contributing factor to an individual’s discomfort.”

“The triggers that often point to a food intolerance are typically: bloating, diarrhoea, constipation, IBS, gut pain, skin problems such as hives, acne, rashes or respiratory like rhinitis and sinusitis. Headaches and migraines, joint pain and low mood / energy should also be considered. A lot of people suffer from fatigue, generally feeling under the weather with some having regular flare ups or continuous symptoms.”

At YorkTest the techniques used to measure food specific IgG antibodies are based on an Enzyme Linked Immunosorbent Assay technique.

“It means we can very accurately and technically measure, using a small sample of blood an individual’s IgG antibody levels. I have been working on these kinds of tests for over 30 years.”

“It is quite easy to use. We send a pack to an individual who then takes a finger prick blood test on to a tiny stick. Just a couple of drops of blood, taken in the comfort of their home. It is then sent back to the lab using a prepaid envelope. From taking the test to delivery in the lab the results usually are ready within five days of receipt.

“The results will show on a numerical scale from 0 to 100 where your reactivity levels lie and also whether you have normal, high or borderline reactivity and you can see very clearly for each of the foods that is assessed.”
It is quite staggering when Dr Hart explains that they test for over 200 food and drink ingredients.

It doesn’t end at this point. To help interpret the results and look for practical solutions YorkTest offers a 30 minute telephone consultation with a nutritional therapist to discuss the results and how to implement any dietary changes needed.

“It is really important people not only get their test results but have full support as part of our programmes.”

There was a recent report about using IgG tests for food intolerance tests and in a statement YorkTest said: “An independent survey of over 5,200 people commissioned by Allergy UK and audited by the University of York found that an impressive three out of four people reported a noticeable improvement in their food intolerance symptoms as a result of following the diet and nutritional support provided by YorkTest Laboratories, 70% of whom found that relief within three weeks. YorkTest Laboratories has been committed to clinical excellence for nearly 40 years.” 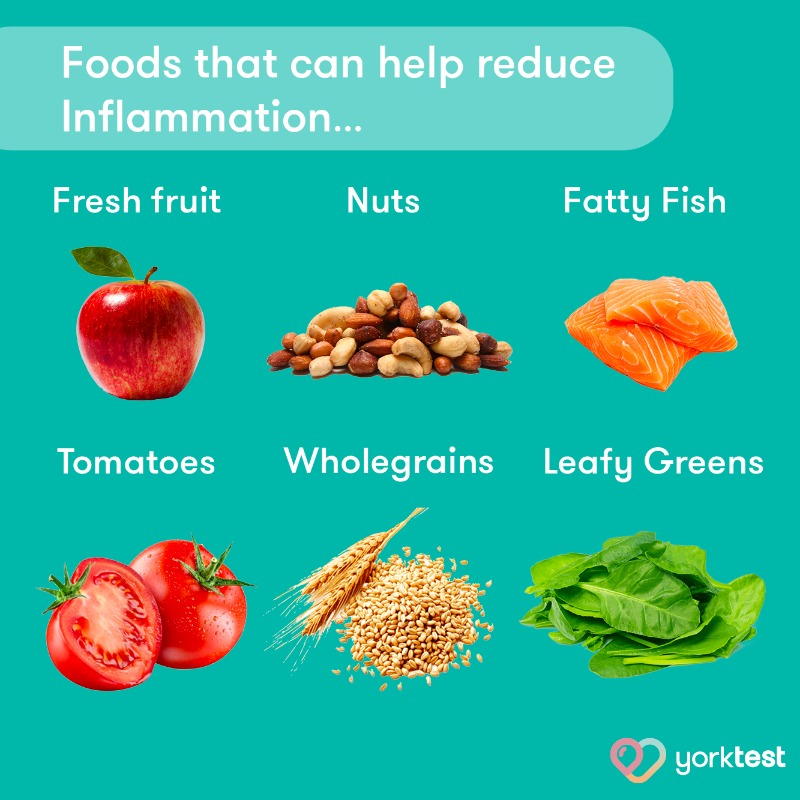 Allergies are quite different from food intolerances as Dr Hart is quick to tell me. “Food intolerances are unique to the individual and on average, somebody that comes to us and gets a positive reaction will probably have reacted to between 5 or 6 different ingredients, although that can vary totally from individual to individual. That’s why we don’t talk about a top 10 of food intolerances as it can be misleading. Someone may think healthy foods such as lentils or carrots would be OK, but they could easily be reactive to them or even fruits and grains. Everyone has different combinations, which is why it is important to get assessed.
*The 14 allergens
Food businesses need to tell customers if any food they provide contain any of the listed allergens as an ingredient.
Consumers may be allergic or have intolerance to other ingredients, but only the 14 allergens are required to be declared as allergens by food law.
The 14 allergens are: celery, cereals containing gluten (such as barley and oats), crustaceans (such as prawns, crabs, and lobsters), eggs, fish, lupin, milk, molluscs (such as mussels and oysters), mustard, peanuts, sesame, soybeans, sulphur dioxide and sulphites (if they are at a concentration of more than ten parts per million) and tree nuts (such as almonds, hazelnuts, walnuts, Brazil nuts, cashews, pecans, pistachios, and macadamia nuts).

“As to the least offending foods it is down, once again, to the individual and includes innocuous items like pears or different rice types that are typically used for an elimination diet but even those ingredients we find people sometimes react to them. It’s difficult but it is important not to mislead as any food or any protein in food can trigger a long standing delayed IgG type of reaction, which can rumble on and cause negative problems for people for quite some time. I like to say we can provide an individual with their equivalent of a fingerprint of results accurate for them.”

Over the last few months as the Covid pandemic gripped the world, Dr Hart and her team devised a Covid home testing trial, because as well as food allergy and intolerance tests, YorkTest has devised a series of other health home tests. These cover an extensive range of nineteen different markers including: cholesterol, liver function, vitamins, and iron to name a few and this has become the YorkTest flagship home health test. Recently added to the list are stress, inflammation, and diabetes; with a new thyroid test and menopause test being launched in November.

“The menopause test is for ladies to evaluate hormones within their blood to give an indication of whether they are not yet menopausal, perimenopausal or through the menopause. Helpful for ladies who are unsure about where they are at that point in their lives.

“We did a small study of around fifty people, tracking their Covid antibody levels. So, for example, we looked at people before and after they have had their first and second doses of the vaccination and from those tests, we were able to determine the average level of their Covid antibodies after their first vaccination is 24 units per ml, after the second dose it is over a 1000 with the highest level over 2500. This reemphasises the importance of having two vaccinations. We have tracked this for six months and from our initial data are seeing a plateau and a drop off.”

“The government is also seeing something similar through its own ONS data, recommending booster levels for people as the antibody levels are dropping away.”
It’s interesting, as Dr Hart points out, that because of Covid, people are much more used to testing themselves and empowering their own health. It’s about making sure their immune system is at tip top condition using the Essential Health Check via four or five drops of blood to evaluate for nineteen different markers. 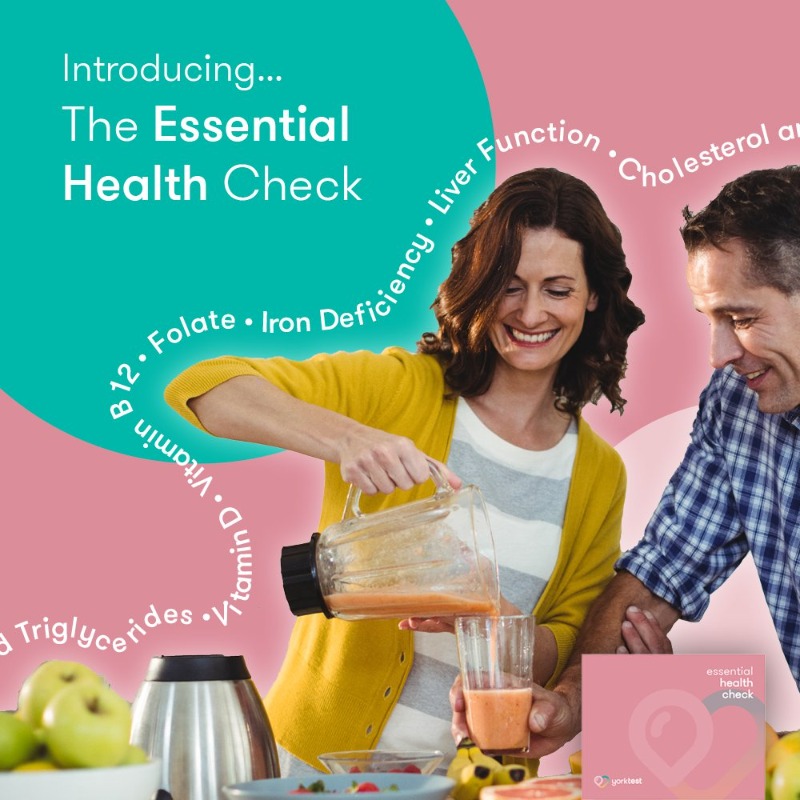 From its base in York, there are forty people ranging from HCPC registered biomedical scientists to admin staff working at the fully accredited laboratory which is fully audited by MHRA (Medicines and Healthcare products Regulatory Agency) annually.

Dr Hart also tells me that there is a whole pipeline of tests due to come in over the next two years, an exciting time. Delving deeper the research and development department is looking at a brand new suite of products and testing services based on existing excellent quality tests to provide accessible answers and solutions so people can really understand what is going on for them.

“It is not just a case of providing a load of numbers without explaining what they mean. People want to know, for example, if they have a vitamin result what they need to do about it and see their doctor and importantly make lifestyle changes.

“It’s about guiding people really carefully and providing lifestyle advice. That’s what makes us different and stand out from other health test providers because several are just providing numbers from a lab which are meaningless on their own.

“We dissect the information, making it easy for the consumer to know what to do with the result.”

There has been a rise in sales and for a couple of months YorkTest had record sales and growth because people are wanting to optimise their health. And take it from me, the finger prick test is far easier and more comfortable than sticking a swab down your throat and up your nose.
Having had my test, it was conclusive and my 30 minute consultation with the nutritionist was valuable although uncomfortable, in learning what I needed to cut out of my diet over a twelve week period before reintroducing a couple of the seven food ingredients. I am already feeling better and seeing some of my symptoms slowly disappear.

It did make the invisible visible and certainly puts another meaning to the phrase “we are what we eat.”


Dr Gill Hart
Dr Hart the scientific director, is a biochemist with many years’ experience in developing and validating diagnostic tests and testing services. Her PhD was looking at pituitary function. Gill Hart worked for the NHS for three years in the 1980s before working for commercial companies developing diagnostic tests from scratch and worked on some of the first automated immuno acid systems. Having worked for herself for six years and developed a home test and supporting other clients on regulatory side she moved to YorkTest in 2005.
Also by Andrew Palmer...
Classical Music Album: John Ireland Orchestral Works - Sinfonia Of LondonWeekend Dining: The Crown Inn At Roecliffe, BoroughbridgeThe Business Interview: Dr Casey WoodwardFantastic Frankie A Tale For Our TimesClassical Music Album: Weinberg String Quartets Vol 2
More in this series...
Tennis Superstar Jordanne Whiley MBE Talks Tokyo ParalympicsThe Willard White Interview: A Secret Rapper?Weekend Interview: Pork Pies - How Do You Eat Yours? Warm, Cold, With Brown Sauce Or Something Else?Weekend Interview: Ben Crick Wielding His Baton Over A New OrchestraInterview: Traditional Balsamic Vinegar As A Symbol Of ExcellenceWeekend Interview: Andrew McCloy Chair National Parks EnglandWeekend Interview: The Joys Of Our Hay MeadowsWeekend Interview: From Bump To Baby. Breaking Down Taboos Of PregnancyWeekend Interview: A Day In The Life Of ABP Humber’s Marine Engineers