Verstappen Holds Off Hamilton In The Lone Star State

The United States Grand Prix, the latest round in this season’s thrilling battle for the Formula 1 Drivers’ Championship, took place today at the eye-catching Circuit of the Americas, located just 18 miles outside of Austin, Texas, and it was Red Bull’s Max Verstappen who held off Mercedes’ Sir Lewis Hamilton to extend his points advantage. 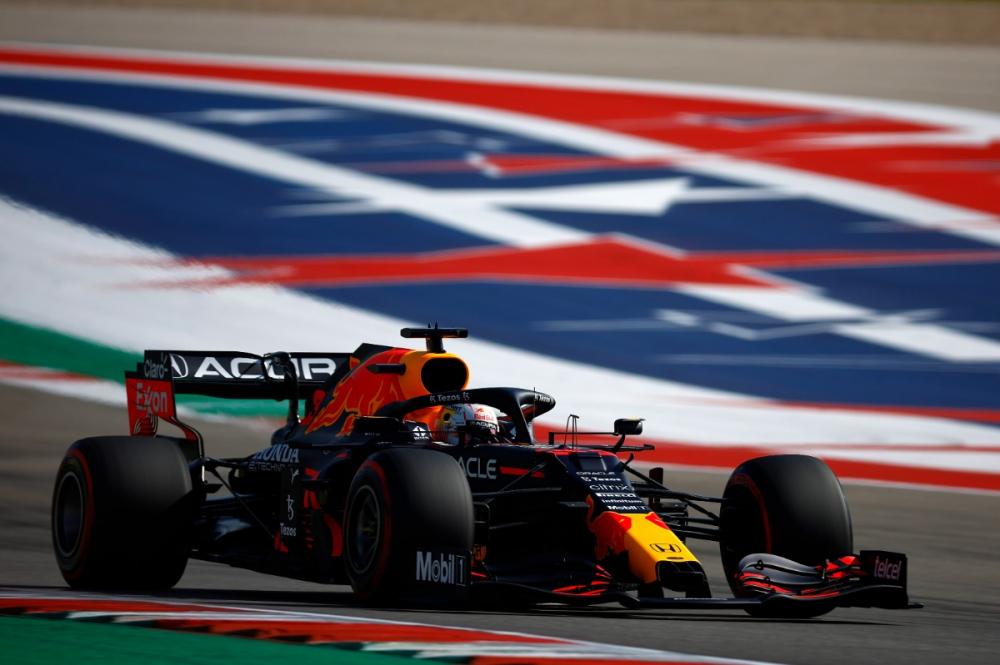 Max Verstappen doubled the size of his championship lead with victory in Texas
The whole F1 paddock loves heading to the US and Texas in particular, with Austin giving the sport and its fans a warm welcome, and it’s certainly one of my own favourite host city and circuit combinations. 130,000 fans attended on each of the opening two days of this year’s event after the pandemic had forced its cancellation in 2020 and today there was a capacity 140,000 full house present to enjoy the Grand Prix live. In the past American TV viewers have often been a little indifferent towards Formula 1, but these days the viewing figures are soaring and this can only be helped by the news that the wellknown American racing outfit Andretti Autosport may be about to acquire a majority stake in Sauber, the Swiss based company which runs the Alfa Romeo F1 team.

This Grand Prix may prove to have been a pivotal moment in the battle between Verstappen and Hamilton as the former left with an increased lead of 12 points, whereas if Hamilton had won he would have been back ahead of his rival.
This would slot in alongside Andretti’s existing racing activities and could open up an opportunity for their IndyCar driver Colton Herta to join the F1 grid and potentially as soon as next season if the American driver is able to gain the mandatory superlicence. Any such development would fit very well with Formula 1 hosting a new second Grand Prix in the USA next year in Miami, although Alfa Romeo’s lead driver for 2022, Valtteri Bottas, revealed in Texas that he had no knowledge of the potential takeover when he agreed to join the team, adding that it would have been nice to have been made aware of this potential development.

The weather in Texas may be predominantly hot and sunny in the summer months, but in late October it can be changeable and this, together with potential tyre wear issues caused by some of the track’s notorious bumps and a typical pitstop time loss of around 20 seconds, meant that team strategists had plenty of variables to consider as they prepared for the race weekend. MotoGP riders had been critical of the circuit’s bumpy nature after racing there recently and F1 had asked for some sections of the surface to be ground down prior to this weekend, but car set-up was still expected to be affected. It’s only a 240 metre uphill sprint from pole position to the first lefthand corner and the unusually wide entry and blind apex, combined with a second DRS zone on the start/finish straight, have always been a recipe for great wheel-to-wheel action in the past and particularly on the opening lap. 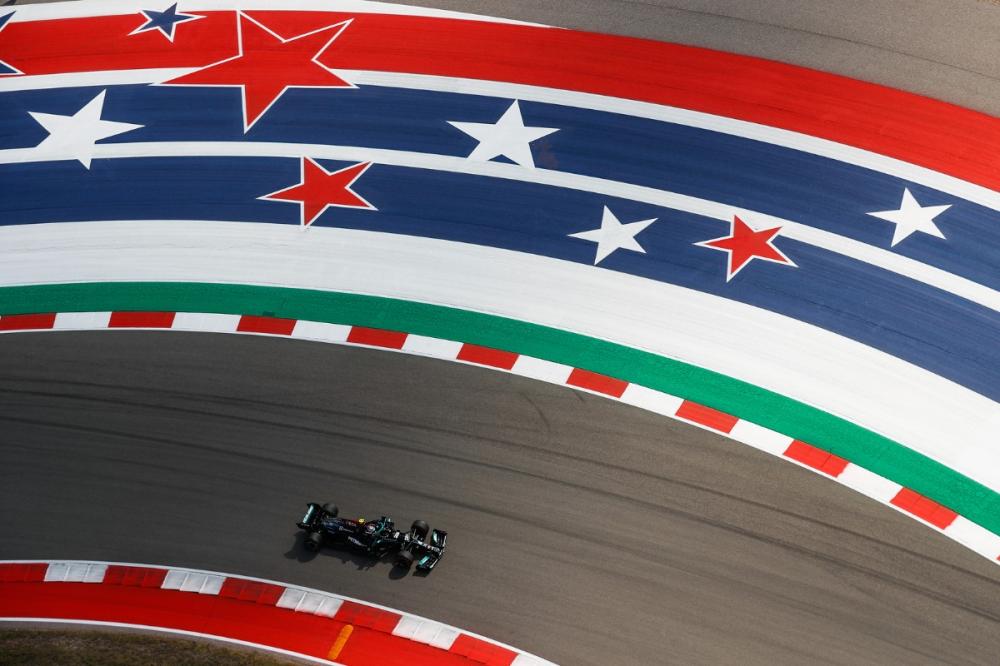 It’s easy to tell in which country the eye-catching Circuit of the Americas is located
Turning to the title battle, Verstappen seemed totally relaxed in the run-up to the US event, saying it wouldn’t change his life regardless of whether he ended up winning the title or finishing as runner-up to Hamilton this year. Explaining his highly pragmatic approach, the championship leader added “For me Formula 1 is just one part of your life, but actually the most important is what is outside of F1. Maybe some people don’t really know how to deal with that.”

Ferrari’s Charles Leclerc had a couple of unexpected detours on his journey to Texas as, although he had the correct pandemic related travel documentation, an official at Nice airport caused him to miss his flight. As a result the young Monégasque driver ended up taking a different flight and enjoyed a first ever visit to New York followed by watching a major basketball game in Milwaukee before heading to Austin. Meanwhile, Sebastian Vettel was expecting a challenging race after his Aston Martin team changed the internal combustion engine and other elements of his Mercedes power unit, triggering a ten-place grid penalty and George Russell faced the same issue and grid demotion re the Mercedes unit in his Williams car. This was also compounded by Bottas facing a five place grid penalty after Mercedes felt the need to change the engine and exhaust of his own power unit, underlining the fact that the team currently has a problem with the quality of the usually reliable power units it produces for its own cars and sells to the Aston Martin, Williams and McLaren teams. Alpine’s Fernando Alonso was also due to start from the back of the grid due to a power unit related penalty. 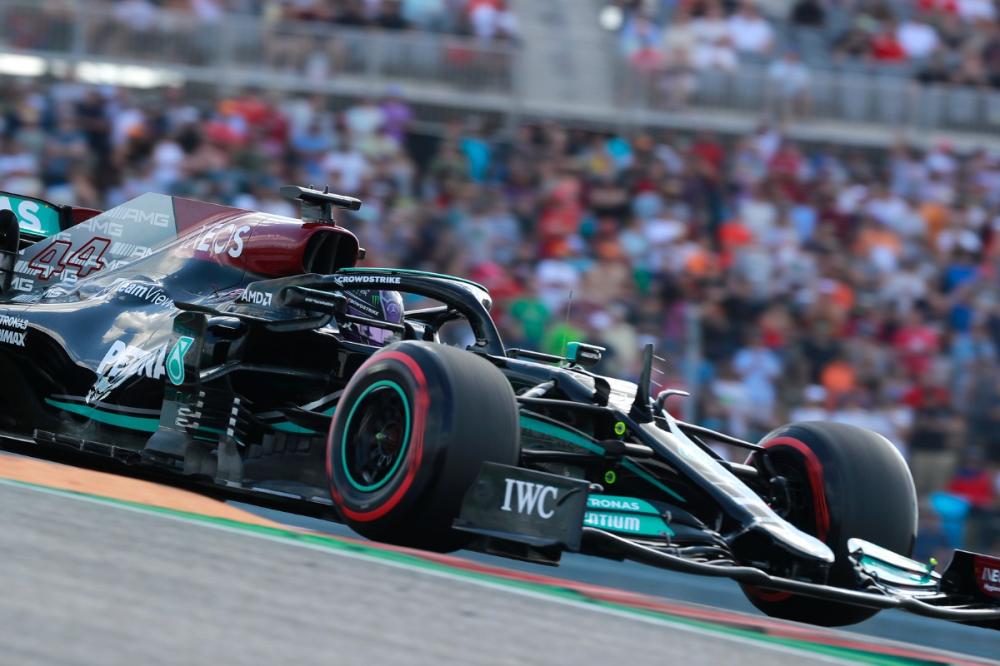 Lewis Hamilton fought hard, but had to settle for second place
Today’s Grand Prix was set to begin at 2pm local time (8pm in the UK) and, as the start neared, the sight of Verstappen and Hamilton lining up on the front row was absolutely gripping, even if the eight metre staggered nature of the grid meant that they weren’t actually quite alongside each other. Both drivers knew that a crucial advantage would be gained by leading as the field entered Turn 1 and that being positioned on the inside was best to avoid the risk of being pushed wide on the exit, as Hamilton had done to title rival and team-mate Nico Rosberg at the start of the 2015 race. The tension was truly palpable as the famous red lights went out, with the biggest question being whether Verstappen and Hamilton would make it cleanly through the opening corner or whether there would again be contact between the pair.

Fortunately contact was avoided as Hamilton made the better start and swept ahead of his rival into Turn 1, with Verstappen running wide. The lead pair then started to pull clear of the rest of the field as Pérez ran third ahead of Leclerc. Red Bull pitted their lead driver on only lap 10 to switch from medium to hard tyres, whereas Hamilton was brought in three tours later for the same change. The result was that a flying Verstappen took the lead as Hamilton rejoined the circuit in second place, six seconds adrift of the new frontman. On lap 30 Verstappen made his second pitstop for a further set of hard tyres, which seemed like an awfully long way before the chequered flag. This put Hamilton back into the lead and Mercedes delayed his second stop for a further eight tours to give him fresher tyres for the final stint of the Grand Prix. When the reigning champion had completed his stop he rejoined the race back in second position, 8.7 seconds behind his rival with 18 laps remaining. 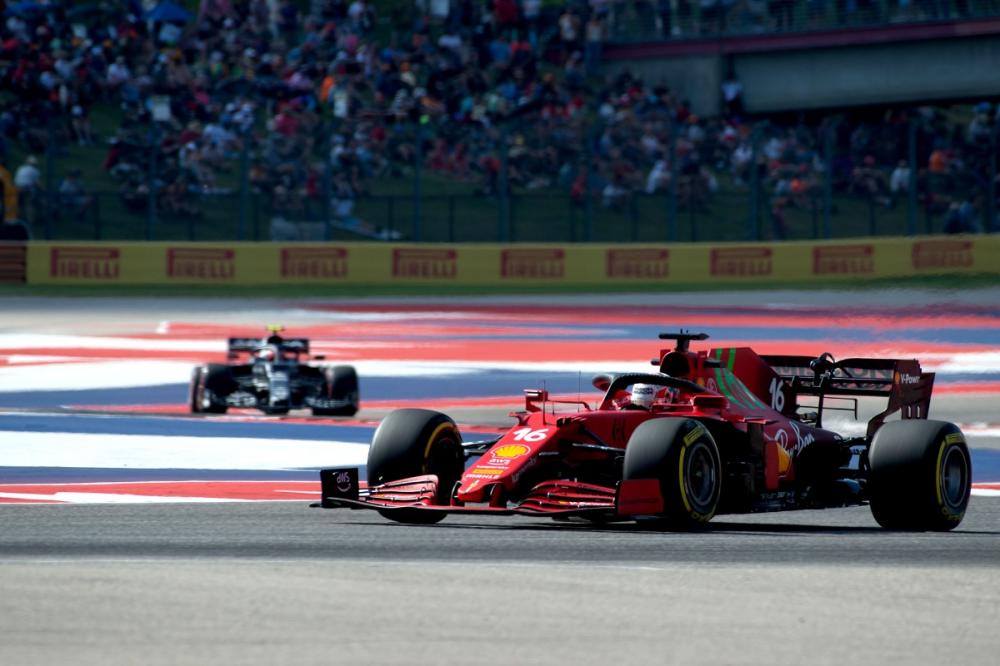 Ferrari’s Charles Leclerc finished just off the podium in fourth position
Hamilton then set about reducing this deficit and a combination of backmarkers costing Verstappen time and Hamilton’s newer tyres meant that come the closing laps he was just a second adrift. Verstappen held on though and took his first victory in America, with 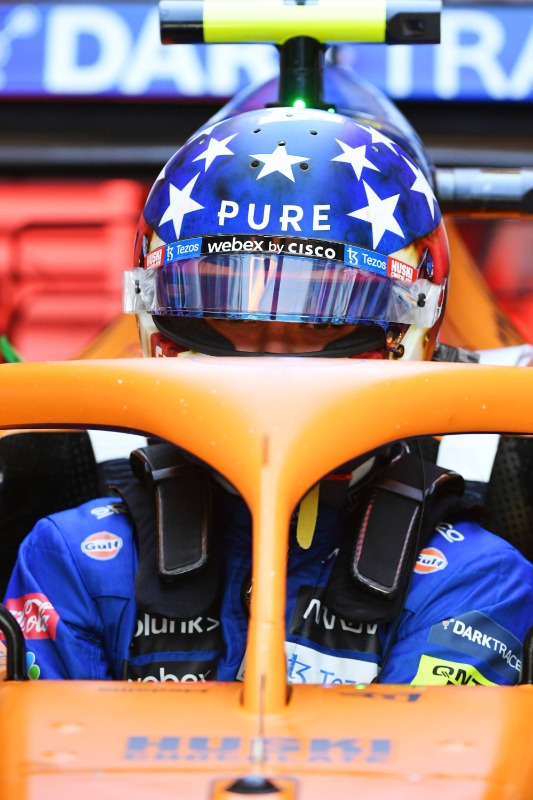 McLaren’s Lando Norris introduced a new helmet design in Texas
Hamilton a strong second and Pérez a distant third. Hamilton at least claimed the extra point for the fastest lap. There had also been some excellent racing between the Ferrari and McLaren duos, with Leclerc finishing fourth and Daniel Ricciardo fifth ahead of Bottas.

This Grand Prix may prove to have been a pivotal moment in the battle between Verstappen and Hamilton as the former left with an increased lead of 12 points, whereas if Hamilton had won he would have been back ahead of his rival. Just five more races remain on this season’s calendar and next up comes the Mexico City Grand Prix in a fortnight’s time. The high altitude of the venue may well influence power unit performance and it will be fascinating to see what happens next as Hamilton and Verstappen continue to fight toe to toe to become the 2021 world champion.