search
date/time
frontpagebusinessartscarslifestylefamilytravelsportsscitechnaturefictionwhatson
No cookies. No tracking. No advertising.
frontpage

Weekend Interview: A Day In The Life Of ABP Humber’s Marine Engineers

ABP Humber Marine Engineer effecting a repair to the South Fort Cardinal marker. Photo: Patrick Knight
This extraordinary photograph was taken by Associated British Ports (ABP) pilot launch deckhand, Patrick Knight. The image highlights the valuable work of ABP Humber’s Marine Engineering Team. Here an engineer is replacing the light on the South Fort buoy, marking the Bull Sand Fort, which you can see in the photograph to the left.

Now owned by the Humber Conservancy Board the Bull Sand Fort, along with another at Haile Sand in Lincolnshire guarded the approach the Humber Estuary during both world wars. Along with various armaments, an anti-submarine net of steel mesh stretched between the two forts across the mouth of the estuary.

In the distance, Spurn Peninsula lines the horizon, with its famous black and white striped lighthouse. The decommissioned lighthouse has been restored and welcomes visitors. You can also see ABP’s former Vessel Traffic Service headquarters at the end of the peninsula.

ABP Marine Engineering Supervisor, Stuart Carmichael, provides a little more insight into the work the team carries out across the Humber in this interview. 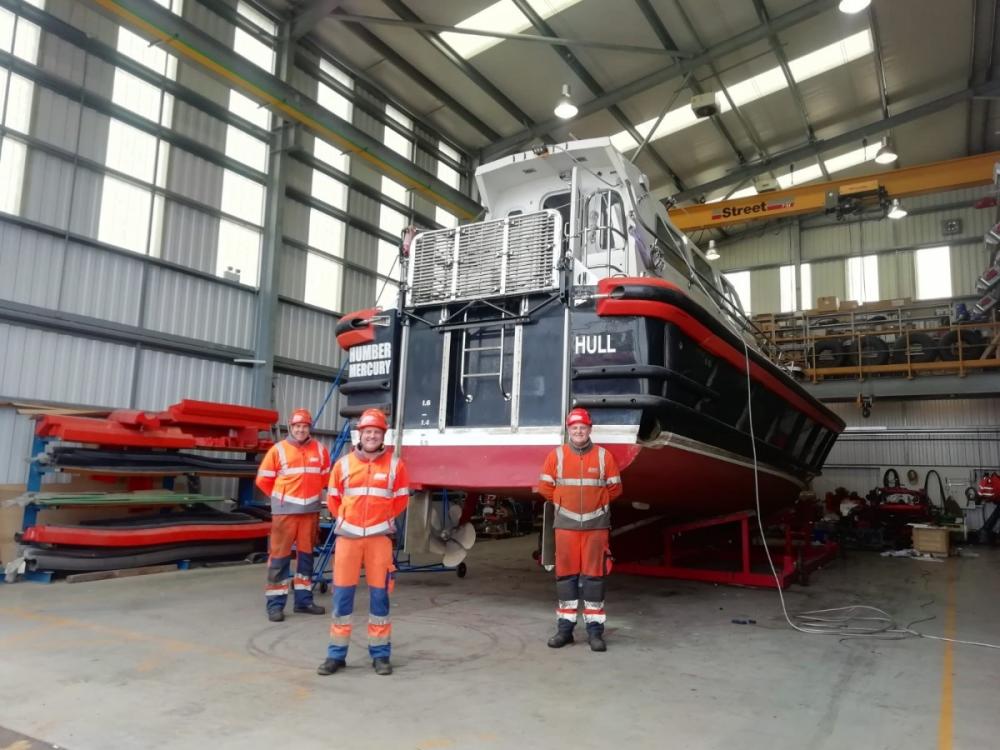 As depicted by the photograph taken by Patrick, we are responsible for the maintenance and repair of roughly 120 floating navigation marks upon the Humber Estuary, which we access from the pilot launch vessels.

In addition to those lights on the estuary we also look after approximately 20 lights up the River Trent. These are all land based, many of them are quite remote and only accessible via farmer’s fields, so we have a Land Rover to get to them.

Another key role we carry out at ABP is the maintenance, repair, and refit of ABP’s six pilot launch vessels. At any one time there are three vessels operating 24/7 on the river. The three spare vessels enable us to ensure 100% capacity for the pilotage service.

Very similar to a car, we carry out an annual MOT on the pilot vessels, with the Maritime and Coastguard Agency (MCA). Every four years the vessel must come out of the water and be opened up for a thorough inspection.

Each pilot vessel runs for approximately 2200 hours per year, and we service the vessel every 200 running hours. The service isn’t simply an oil change, it is a full look through the vessel from the bow to the stern. We are then able to pick up on things that may be about to cause an issue; this preventative maintenance is an essential part of our work.

The team is also are responsible for the maintenance, repair and refit of ABP’s two hydrography survey vessels. These vessels are also included with the MCA inspections.

As a team we provide 24/365 support to the six pilot vessels and two survey boats. We work a two shift system consisting of day/late shifts, and there is always one engineer on call through the night to support any breakdown situations.

In the summer ABP Humber will be welcoming the first of five new state-of-the-art pilot launch vessels.

How did you and the team start out in engineering?

I started working as a marine fitter apprentice, back in 1990, straight from school. I completed 15 years on my tools, and then I took the role of supervisor in 2005, which I have been doing for what will be 16 years the end of this year.

When I was younger, I used to build bicycles, so my passion for engineering started there. I was looking for a job in engineering, and at the time there were a lot of shipyards in Hull. I applied to most for an apprenticeship and was offered three. I chose ABP as I was going to be their only apprentice, which I felt would really benefit me as I started out.

Within the team there are six marine fitters on shift, myself, and our apprentice who has been working within our unit for the last year. We have a great mixed age group, from 60 to 22. The length of our combined service at ABP totals 167 years, which is incredible. Six out of the eight of us started as ABP apprentices, so that really says something for the company, and two members of the team are ex-armed forces.

Anyone can sit in classroom and learn from a screen, but to become an engineer you need the practical application and practice with tool and parts. We rebuild engines in-house, so the apprentices coming though now, are getting an experience that makes diagnosing faults so much easier. Restoring and refurbishing is also a valuable skill to have as an engineer.

What does an average day look like for the team?

Every morning I receive a report from VTS (Vessel Traffic Service) that lists any defects on the three pilot launch vessels in service. I then decide if the vessel requires an engineer to carry out a repair or can wait until its next service. Anything safety critical is considered a priority and resolved straight away.

We also receive a daily river report which contains all sorts of details, including ‘aids to navigation’. This highlights if there are any deficiencies with the navigation marks. These are reported to the VTS by vessels, pilots, pilot launch crews and anybody else passing.

We effect a repair with a self-sufficient light, it is a small unit with solar panels and its own battery pack. These lights are programmable, each light within the river has a different flash code, this aids the vessel’s pilot or captain to navigate safely during the night. There are certain flash codes that dictate what sort of buoy it is and whether you pass to the port or starboard, north, south, east or west.

The lights are very efficient and reliable, they do not cause us a lot of problems. Any issues we do have are often a result of poor weather, snow or anything that can affect the availability of light to charge the solar cells.

The plan for the day can change quickly. The team could be deployed first thing to a repair or service, and then we could receive a call from the VTS informing us of a problem; perhaps an engine overheating, or a vessel which has caught a rope around its propeller. Our priorities can change across the day. The work we get to do is interesting and certainly keeps us busy, which makes the hours and weeks fly by.
More in this series...
Weekend Interview: Discovering Your Unique Blueprint To Food IntoleranceTennis Superstar Jordanne Whiley MBE Talks Tokyo ParalympicsThe Willard White Interview: A Secret Rapper?Weekend Interview: Pork Pies - How Do You Eat Yours? Warm, Cold, With Brown Sauce Or Something Else?Weekend Interview: Ben Crick Wielding His Baton Over A New OrchestraInterview: Traditional Balsamic Vinegar As A Symbol Of ExcellenceWeekend Interview: Andrew McCloy Chair National Parks EnglandWeekend Interview: The Joys Of Our Hay MeadowsWeekend Interview: From Bump To Baby. Breaking Down Taboos Of Pregnancy