There have been some remarkable days in recent British cycling history and this belongs in that company, yielding five medals to swell the track haul to six golds and 14 gongs overall.

It started with Sophie Unwin, who was working in a supermarket in Kent just over a year ago and had never ridden a tandem, breaking the women’s B 3000m individual pursuit Paralympic record.

She and Jenny Holl clocked 3:22.670 in qualifying to lay down a marker.

Then along came Lora who, having watched Ireland’s Katie-George Dunlevy break the world record, brought down that new mark with an incredible 3:19.483.


Lora Fachie and Corinne Hall won a scintillating gold
Fachie and Corrine Hall delivered a dominant ride in the final to beat the Irish and retain their Paralympic title.

“I’d dreamt of this, we hoped that it would happen,” said Fachie. “I was scared it wouldn’t come true, but it did. We were both feeling the pressure this morning and quite stressed about it.

“I didn’t know what Ireland had done, and I’m quite glad about that. It’s a pretty special day.”

Neil won gold at London 2012 but missed out on sharing the moment with his wife at Rio 2016, when he took tandem kilo silver. 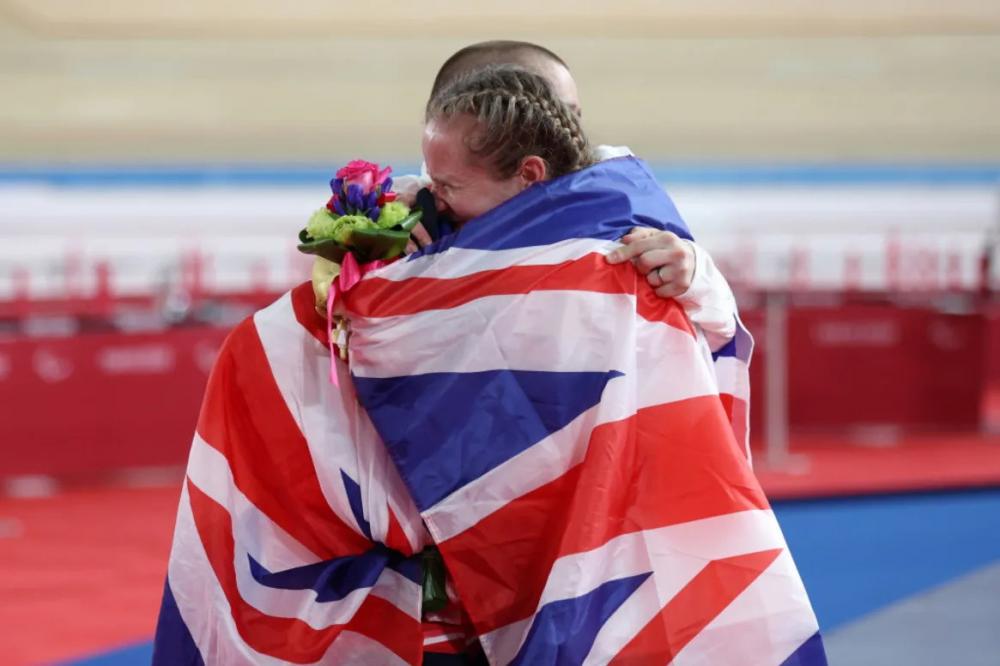 The Fachie family enjoyed a memorable day in the velodrome
He has been a man on a mission ever since, pushing the boundaries of the event with Matt Rotherham and they lowered their own 59.278s world record to 58.038.

“You’re always aspiring for the perfect race, and it’s something you never achieve but I feel like that was pretty damn close,” said the 37-year-old.

“I knew we were fast, the bike felt fast. We just had to dig as deep in that last lap as we could. When Matt told me the time, I couldn’t believe it.”


Neil Fachie and Matt Rotherham smashed their own world record
Behind them in silver medal position was fellow Brit James Ball and pilot Lewis Stewart.

It was a special moment for the Welshman, who came fifth at Rio 2016 and failed to finish in the opening event of his programme in Tokyo, the 4000m individual pursuit.

The final track cycling event of the Games couldn’t have provided a better crescendo to a brilliant week in Izu, with ParalympicsGB taking gold in the mixed C1-5 750m team sprint.


The mixed team sprint squad rounded out the Tokyo 2020 track cycling programme with gold
Cox’s searing lead out saw her cover the first lap in 20.032 and Cundy eventually threw the bike over the line ahead of Lai Shanzhang for a world record time of 47.579s.

Cox said: “Beating the boys makes it even sweeter for me. I could have been scared as the only woman racing a team of amazing guys, but I’m a great athlete in my own right.

“I’m just trying to show people that if you put your mind to something, you can absolutely nail it. I’ve not done sub-20 before and I’ve done it twice in 48 hours now!”

Van Gass said: “We’re from very different backgrounds but we have the common interest of giving our best and being the best athletes and individuals we can be.

“It doesn’t matter where you’re from, what race, what colour you are, we all have a common interest of riding the best we can and winning gold and that’s what we did.”