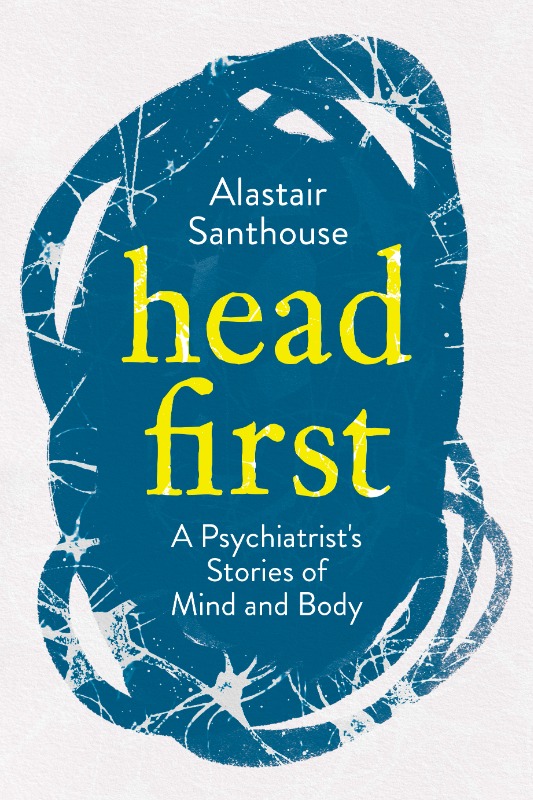 I caught up with Alastair and kicked off what was an interesting discussion, by asking him: What does it mean to be well?

“There’s a good question. We often phrase wellness in the very narrow, very physical sense of whether our body parts are functioning as they should. But wellness is more than that, it’s about our state of mind too, in other words your body can function normally, and you can feel ill.


Book your ticket to hear Alastair speak and ask questions: https://harrogateinternationalfestivals.com/whats-on/head-first-with-alastair-santhouse-a-psychiatrists-stories-of-mind-and-body/
You can feel unwell, and you can have pain without the obvious cause. So, I think wellness also includes a feeling. It’s not simply that the machine is in good working order but it’s also a subjective feeling, “Alastair says.

It’s an interesting concept and probing a little deeper I wonder if its more to do with how the mind plays with us.

“I think that’s right. People can have a body that’s working and feel unwell. They go back to their doctor saying I don’t feel right, and the doctor says, ‘we’ve done all the tests and we’ve done all the investigations and we can’t find anything wrong.’

Stumped I let Alastair continue. “According to the doctor they might be well because there’s nothing serious that the doctor can find, but the patient says that they feel ill and so another question is how can people be ill without a physical thing having gone wrong with their body. And that happens all the time.

“For example, you could say people get tension headaches – are they ill or are they well? We know they’ve not got anything seriously wrong with them, but there is no serious medical cause, and we know the cause was spread by tension - hence the name tension headache - but what the patient feels is ill.

“There is a disconnect if you like, between a strict medical analysis of how the body’s functioning and people’s subjective sensation of whether they are well.


Alastair Santhouse
“Andrew, the question then – is that patient ill or are they well?”
“There’s some very interesting studies done, and I guess it depends on what study you read, but approximately half of all patients who go to a hospital – in other words the people who have made it through their GP and been referred to hospital, for approximately half of them the doctors can’t find a physical cause to account for why they’re there. It’s reproduced in various countries and in various situations.

“You put your finger right on the knob of it with your first question, which is the sense of what wellness is and what is illness.


During our interview I learnt that Alastair’s destiny was mapped out for him from an early age.

When he started drafting the book he realised in retrospect that he was always going to be a psychiatrist.

"One of the things I did which I hadn’t really thought about for years and hadn’t realised was quite odd, as some people thought it, was that my sister used to get this teenage girl magazine, I can’t remember now which one maybe Jackie, but anyway it had a problem page with these agony aunts called Cathy and Claire.

"At 13 I would scuttle downstairs when it was delivered in the morning before anyone got there and go straight to the problem page, cover up their answers and write my own answers down on a little sheet of paper or actually a note book and I kept this sort of database about teen’s difficulties and I would compare my answer with theirs. I discovered much later that it was only one person this Cathy and Claire. Anyway, that was something funny that came out for me much later on that I was always going to end up doing something like this.
"I suppose part of why I wrote Head First was to try and understand and redefine how we think about our health and how we need to factor mental health as part of our physical health sensation.”

There’s a lot to take in here about why people do the things they do, why they go to their doctors, why they say that they don’t want treatment, and Alastair wants to shed light on issues about our state of mind. Is it then a case of reframing the way society thinks.

“There is a strong need people have, and society has too, to make order out of chaos, to try and simplify complex problems, like health. We can think of the body as a machine that sometimes goes wrong. What we forget are the human factors, why people experience things they do and why symptoms present in the way that they do. This is a long way from saying that people are making it up or that their symptoms are not real. They are very much real.

“Does there need to be a reframing of how we think about illness and health? Medicine does an amazing job for people with certain illnesses. We understand a great deal about diseases in a very specific way and it’s wonderful but there are a number of people who fall outside that paradigm, and we keep trying to shove them back into it with more investigations and more tests, sometimes forgetting the psychological aspect.

"And that’s the point at which I decided to retrain as a psychiatrist and ended up working in the interface between physical and mental health."

We have to rethink, take the stigma around obesity I suggest.

“l know what you mean. In my book there are illustrations of people I’ve met who feel, I guess for want of a better word, have an emotional hunger where food serves a purpose, it fills a void in their life, their routine, and they have a reason, because it’s a comfort and because they have been rejected by society in some way or have had an experience which pushes them down that road.

“Obesity is a subject where you can take a very reductionist simple approach, calories in versus calories expended, for example, but it doesn’t capture the complexity of why people behave the way they do or why they find it so hard to lose weight and so again, you need the psychological input and that is one of the series of examples, whether in hospital or healthcare.”

What then, I ponder can we do as individuals to start to think about this?

“I think that’s a difficult one and I’m not sure what the answer is and what we could do differently. Part of what the book is about is trying to reframe this conversation, but people think differently about their bodies and their health."

A nice link back to your book Alastair. What prompted you to sit down and write?

"It could be about why people did or didn’t want to take their medication or why people choose not to have lifesaving treatments towards the end of their life. All these kinds of decisions are very much driven by people’s psychological sort of state of mind and I think that if we overlook them we are not doing justice to their overall care. It was just gathering a sense that perhaps this could be more widely known and that it gives people, I hope, a different way of thinking about themselves. "